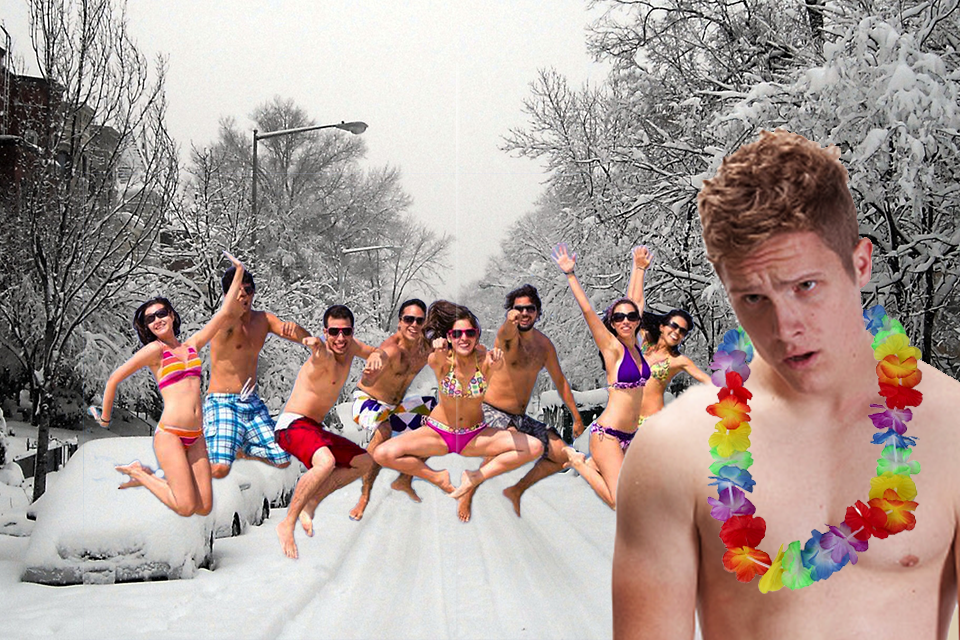 This past week, WPI seniors finally lived out their MTV-inspired spring breaks and returned to Worcester for their final D Term. However, rather than being greeted by more sunshine, excessive slacklining, and increased BAC’s from quad drinking, they were bombarded with one more Nor’easter to finish off their undergraduate careers.

The Institute caught up with some of these seniors who “literally couldn’t even.”

“I got this spray tan before spring break so I could have it for the rest of D Term,” reported one fraternity brother angrily, now sporting a skin tone more reminiscent of the Jersey Shore cast or the Oompa Loompas than the natural sun-kissed bronze he was hoping for.

“This is ridiculous, my alcohol stock is all messed up. I only have tequila and Coronas, but this weather is just screaming schnapps and hot chocolate!” remarked another student, trudging her way towards Highland Liquors.

One suspicious student even went as far to say that this out-of-season snow may be a hoax by the Chinese, but The Institute Investigative Team was unable to collect any additional evidence to support this theory.

Other students are trying to make the most of the situation. Senior, Kelly Doppy found her ‘Spring Breaaaaaaaaak’ sunglasses helped protect against the blinding white snow, while senior civil engineering major, Johnny Johnson was seen on the quad still rocking his tank top and flip flops as he put the finishing touches on his igloo.

At press time, a group of pissed off sorority girls was seen huddled around a stack of Dunk’s Hot Chocolates waiting for the weather to “figure its shit out.”